New Item at the Museum! Flapper Dress
The museum recently acquired a new item that will be on display when the museum opens for the season, a wedding dress. The dress is a 1929 flapper style and was worn by Geneva Saxton when she married Lawrence Eberhardt.  Geneva was the great-great daughter of Ebenezer Saxton, one of Merrillville's earliest settlers.  Geneva (1909-1997) was born in Merrillville and lived her entire life here.  She was well known as "The Avon Lady" since she sold Avon products for over 50 years!

This dress was only worn on June 8, 1929 when Geneva Saxton married Lawrence Eberhardt in Merrillville, Indiana.
Hope all those that were able to attend the Member's Museum Party had a great time!  Here are some shots from the party.
Additionally, we would like to recognize our 2014 Member of the Year, Ed Boer
Thanks to all those that were able to attend the Merrillville Veteran's Day Ceremony at the Merrillville Town Hall for the holiday.  It was great to see such a large and supportive turnout to honor and celebrate those that served in the U.S. Armed Forces. 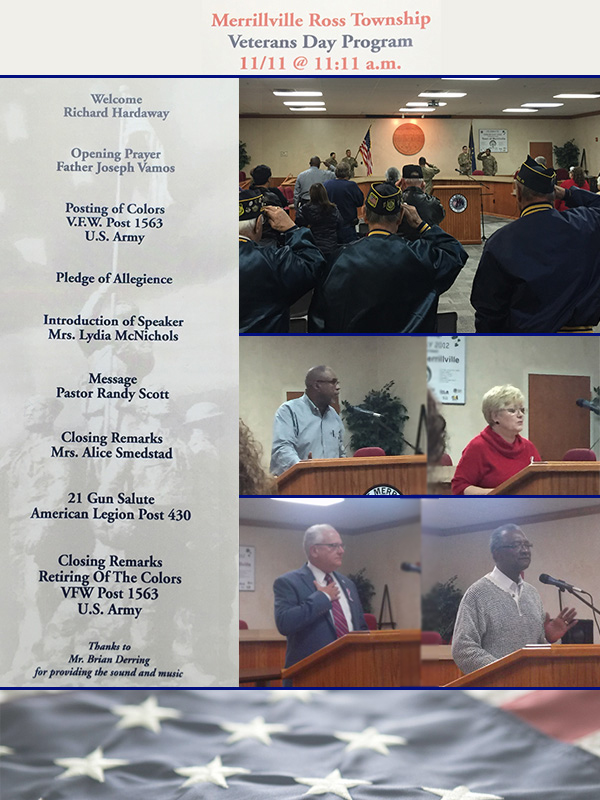 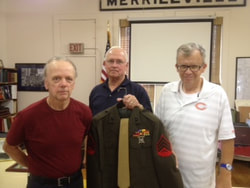 Thank you to Jack Kemp for sharing your experiences as a U.S. Marine during the Vietnam War.


The exhibit's opening was recently featured in this NWI Times article.
Gregg Popovich, has roots in Merrillville.  Read our new article on the coach to learn more!

We received the following email update from Jeff Blair of the Indiana Lincoln Highway Association regarding his recent work raising funds to aid both the Alzheimer's Association and Lincoln Highway Association.  (See pictures on our Recent Photos page)
Just a short note to say a big Thank You for opening up your historical society, meeting with me and others, and helping make my walk across Indiana memorable.  I really do like what you all are doing there in Ross Township and Merrillville at the school, with signage, and more.  As always, if we can do anything to assist you, we sure will.
The walk took 11 days and was a bit cold at times, though I was able to dodge the rain for the most part.   We raised over $15,000 too so that part was good for both the Alzheimer’s Association and Lincoln Highway Association.
All the best and thanks to your whole team!
-Jeff Blair

Early in 2014, the Merrillville Town Council created an Historic Preservation Commission to assistant and advise the establishment of an Historical District along 73rd Avenue.  Read more here.

Bruce Staehli (Merrillville High School Class of 1967) has a permanent exhibit at the museum and was recently written about in a NWI Times article.  More information can be found in this article.